I learned a valuable lesson last night…it’s okay to give people a second chance.  Crazy, grudge-holding Virgos, it’s okay to be wrong or wronged.  You will learn something if you give people a second chance.The last time I saw No Age was during 2007’s CMJ at the Bowery Ballroom. I thought they were HORRIBLE, with a capital H-O-R-R-I-B-L-A-H. The only thing I got out of that crap gig were a couple of great shots that, ironically, are some of my favorite live shots of all time.

After last night’s show at the Southstreet Seaport (who do summer concerts every Friday, check out the listings: http://www.seaportmusicfestival.com/ ) I realized I was wrong.

Los Angeles-based (yaay West Coast!!!) No Age was absolutely brilliant! All I have to say is they didn’t seem like the same band I saw last year. I must’ve been on crack last year, just kidding, I don’t do drugs. I D.A.R.E.! Haha! Shut up cool kids…

Anyways, last night No Age was just two guys on drums and guitar, churning out some really catchy hooks and melodies, with some out of key singing. Just like last year’s show, the crowd went mental. The security guys actually had to come into the photo pit and hold back the barricades. I think I’ve only seen that happen one other time at a Seaport show.  I ran out of that pit like George Costanza…move it Granny! 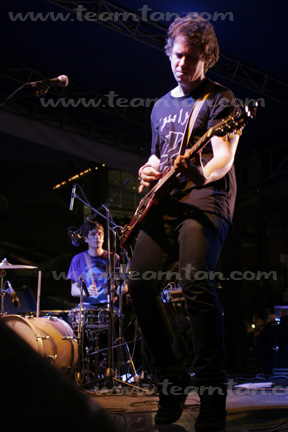 He looks like he’s doing that Michael Jackson toe stand after the moonwalk.  Wooo-ooo!

Is that Mike D? MWAHAHAHA!

Do you know how to google?  No?  Well then here, I’ll do the work for you, lazy motherfu…