Here is an update from The Yellow Dog’s Manager, also posted on Pitchfork:

The shooter was not a former member of the band The Yellow Dogs, he was in another band from Iran and the two groups were acquaintances in the past. A personal conflict between the guys resulted in the dissolution of their relationship in 2012. The shooting resulted in the death of two of the members of the Yellow Dogs, Sourosh Farazmand (guitarist) and Arash Farazmand (drummer), along with a friend of theirs, fellow musician and author Ali Eskandarian. The shooter died from a self inflicted bullet wound on site.

This is not a post I want to have to write, but this is the news I got this morning.  More info can be found on the Daily News’s webpage.  Members of The Yellow Dogs were victims of a murder suicide early this morning in their Bushwick, Brooklyn apartment:

An indie rock musician killed three former bandmates and wounded another in East Williamsburg early Monday before going to the roof and shooting himself, police said.

This is truly sad and utterly shocking, and my prayers go out to the band’s families, friends and loved ones. 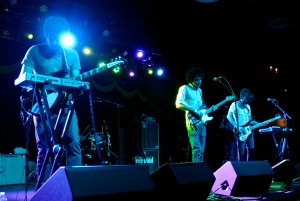