“He was a down to earth, nice guy.” That was how Peter Hook described Ian Curtis, the singer of seminal Manchester band Joy Division.  Furthering his statement by saying he wasn’t the dark ‘goth’ that so many imagined him to be.  According to Hook, Sean Harris’s Curtis in 24 Hour Party People was a more accurate portrayal of the singer than that of Sam Riley’s performance in Control.

Hooky, as he is known, is currently on a book tour to promote his current book Unknown Pleasures ‘Inside Joy Division’ which recounts events, to the best of his recollection, the Manchester band’s journey from forming a band to the loss of Curtis, the band’s evolution, and the people who helped shape and define that 20th century post-punk scene.

At The Strand in New York City on Tuesday, 29 January 2013, Hook talked about how his mother had wanted him to have a proper career, like a police officer, but after a Sex Pistol’s show, his mind was dead set on starting a band.  He could revere Led Zeppelin and Deep Purple, but he knew he could never do what they did.  But The Sex Pistlols?  Surely he could do that.

Hook recalled tales of shows where fights and spitting were routine, having us imagine the room we were packed in, with all of us in the audience, spitting onto the stage.  This is a visual I do not want to visualize.  He talked of incidents where he had to fight off the crowd with his bass just to protect his singer.  I suppose it was just the way things were back then.  I’m fortunate enough to go to shows where the worst thing that could happen is someone accidentally spilling beer on you, followed with a slurred apology.

The evening’s conversation with New Yorker music critic Sasha Frere-Jones included numerous anecdotes from Martin Hannett and his baffling quote of playing it “…faster but slower”, to Hooks disdain for downloads, to playing in his current band Peter Hook & The Light with his son Jack Bates, who he said was more into Pearl Jam than Joy Division.  Well…to each his own.

Hook has a few more dates on the west coast: January 31 at JCC of San Francisco in San Francisco, February 1 at Skylight Books in Los Angeles, and February 2 at M-Theory Records in San Diego.

Purchasing this book only means I’ll have to put my other books on hold, but so far this has been an interesting and enjoyable read. 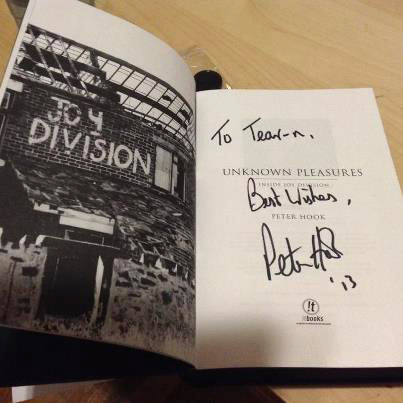