“I think about fashion a lot…but I also think about it in its context”.  This is Andre Leon Tally at New York’s French Institute Alliance Française during FIAF’s ‘The Power of Style’ series, curated by Melissa Ceria.  The world renowned Editor for Vogue and Numero Russia graciously and humorously shared his favorite images of little black dresses to a sold out audience at the Florence Gould Hall last night.

Little Black Dress (Rizzoli) is a collection of about 100 images of donated world-class examples of couture represented in an LBD.  The concept of the book was born when Talley was curating ‘The Little Black Dress’ exhibit for the SCAD Museum (Savannah College of Art and Design).  Dresses were donated by various designers, SCAD President Paula Wallace, and Editor-In-Chief of Vogue Magazine Anna Wintour, whose LBD by Karl Lagerfeld happens to be the cover image. 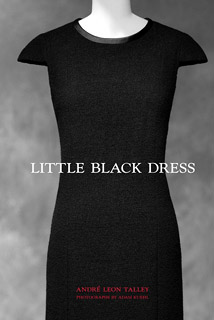 Throughout the evening Talley went through his favorite pieces via a slide show.  Various designers included Balenciaga (1957) whose piece Talley said represented what “a black dress was and always should be”.  A black version of Gwyneth Paltrow’s 2012 Tom Ford Oscar dress was also in the book.  This was a dress that Talley said one needed to stand out in, as Talley was “sick of mermaid dresses, pooled trains, borrowed bling, and …a pose.”

There was definitely plenty of humor, wit, and unexpected discoveries throughout the evening.  Neoprene is a fabric one doesn’t usually associate with evening wear, but Talley loved a 2012 Alexis Asplundh piece only to find out the designer used neoprene because she was a scuba diver.

Designer inspiration is an aspect covered in the book and that included a Lagerfeld 1986 ball gown designed for Chanel.  With an encyclopedic knowledge of the 18th century, the designer’s Chantilly lace on cotton organza was for Talley the romantic epitome of a beautiful ball gown because of its ability to ‘linger’ in Talley’s memory.  Ahhh yes, I remember pieces that linger; they weren’t always romantic, though.

The LBD isn’t always an LBD, as well.  Included in the collection were pieces that gave the essence of the little black dress, but in different hues, including a 2001 Oscar de la Renta sapphire blue blouse with a blood red ruby skirt. 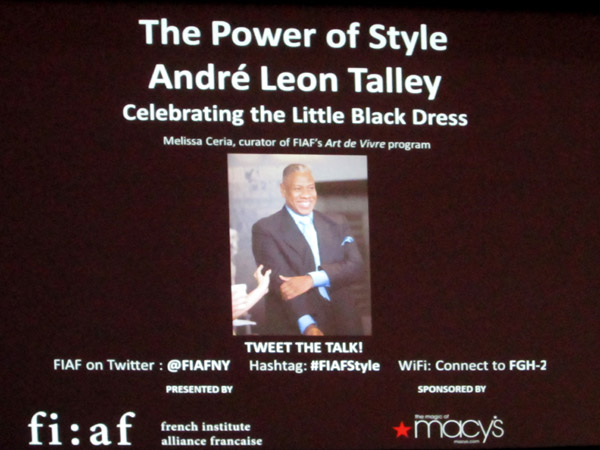 As Talley figured out his style at such a young age, in his early teens, he felt it was due to his upbringing.  Surrounded mostly among adults, Talley revealed the key to knowledge was just listening.  He was sick of young people who felt they could just suggest to someone of his age.  When he was learning, he just listened.

Talley’s two most important examples of fashion were two lady whose paths were quite different, but whose essence very similar – his grandmother and former Vogue editor Diane Vreeland.  From humble backgrounds, whose wealth was in cooking and family gatherings, Talley’s grandmother taught him elegance.  This was the lady Talley had seen skinning a squirrel, chopping off a chicken’s head, and chopping wood.  As he recalls fond memories of Diane Vreeland, his favorite ones with Vreeland were of him reading to the lady who taught him everything about fashion.  This was the lady who demanded Talley get Prince on the phone to have dinner with her soon after he read an article to her about the singer.  These poignant moments were when Talley’s advice was to be best utilized, to just listen.

After the slideshow, audience Q&A followed.  When asked if he would design, Talley replied with “Never!” as it was too much pressure.

When posed with the question of his opinion about the people he sees on the street, “I think the average person is well-dressed for the most part” [the obvious exception being when they’re not wearing sagging pants, of course.]

His advice to upcoming couture designers:

1) Never give up your dreams.